Join the P is for Pregnant Community on Facebook!

Add Me to the group!

Full list of TTC Acronyms. This post may contain affiliate links.  For more info please read the disclosure page. Jackie is NOT a medical professional, information provided on P is for Pregnant is strictly for information purposes only. Please consult with your physician before making any changes to your healthcare routine. Find out more here.

How to read ovulation test strips – The Narrative

So, you bought some ovulation test strips to help you get pregnant.

You decided to go the more economical route at less than .25 cents a test. You frugal Queen, you!

Your phone dings with an Amazon notification that your package has been deliverd.

You run to the door in excitement… because who doesn’t get giddy over a TTC product delivery? I know I did!

You fling the door open, snatch up the package look both ways then slowly back into the house and close the door behind you.

You stand there and gauge whether or not you have to pee. You’re on the fence but you think you can make it work.

You trip over your own foot, take a deep breath and tell yourself to walk, don’t run.

Act 3 – The Reading of the Ovulation Test

You walk back to the toilet, you squish your face and ask out loud … “How the hell do I read this thing?”

You stand there perplexed, and wonder if you made a mistake – after all a smiley face would be so much easier to read.

You start regretting not reading the instructions fully, you dig the wrapper out of the trash. You read “As dark as or dark than the control line”

You stand there, holding your pee stick and ask wth does this mean?

You pull out your phone, bring up the internent browser and type in “How to read ovulation test strips”

You land on a website – and now you are here.

And End Narrative – the applause is defining.

Thank you, thank you! I am here all week!

Okay, sorry I had too much fun writing that as it just brought back some memories from my TTC years.

Now, onto the real reason your here, let’s dive into how to read those pesky ovulation test strips.

How to Read Ovulation Test Strips | The Real Info

I love me some OPKs, it is my go-to method for tracking ovulation and I would be lost without it in my TTC Arsenal.

They are a huge part of the P.R.E.G.O Method and an even bigger part of my Baby Making Blueprint.

What I don’t love is reading them. I admit I am so seasoned now that it doesn’t give me grief anymore but when I first started using them they gave me how.

I was constantly asking google questions –

Sound familiar? Probably as you did land on this page. lol

What I am saying is I totally get it trying to read those two lines is a b**ch!

Don’t forget to join the P is For Pregnant TTC Support Community on Facebook to get an extra set of eyes to help you read your OPK results!

ADD ME TO THE GROUP!

How long should you wait to read an ovulation test?

You want to give your ovulation test the full window of development before you read it.

I personally, try not to read my OPKs for 15 minutes. I like to add on 5-10 minutes to the development time listed on the instructions to make sure I gave it enough time.

I also hold onto my tests for an hour or so until they are dry.

I don’t know why I do this but I do. lol

Maybe it’s FOMO (fear of missing out) like I read the result wrong the first 50 times I looked at it and it will magically change if I throw it in the trash before it’s died and dry.

Just remember OPKs let you know ovulation is coming, not that it has occurred.

If you want to “know” you’ve ovulated you’ll have to start BBT Charting.

Can you Get An Evaporated line (Evap) on an Ovulation test?

No – you can’t. I have NEVER heard of or seen research showing false positives (UNLESS you are on meds) on ovulation tests.

So, you don’t have to worry about evaps on your OPKs.

Besides, by some off chance you do get an evaporated line on your tests it would be very faint… and it still wouldn’t mean anything.

And IMO (in my opinion) if you read a pregnancy test at the 15 minute mark and see a VFL (very faint line) you are pregnant.

Which is a legitimate pregnancy so the test would not be wrong. Part of the reason it is advised by most NOT to test before your missed period.

How To tell if an Ovulation Test Strip is Positive

Your OPK is ONLY positive if the test line is as dark as or darker than the control line.

You should keep testing and expect to see a positive result the next day.

Go ahead and start getting busy when you see the “almost positive” OPK but I would not start counting DPO (days past ovulation) until after you get that blazing positive.

A positive ovulation test strip is going to have two lines, a test and a control line.

The control line is always the line that is closest to the handle of the strip. The test line is going to be closest to the absorbent end that is dipped in urine.

A positive result is as dark or darker than the control line. When in doubt err on the side of caution and just go ahead and DTD (do the deed)

To get the most accurate results make sure you are testing at the right time of day.

How Long will an Ovulation Test Stay Positive

Most women get one, maybe two days in a row of positive test results.

The cycle before I got pregnant with my first I actually had four days of positive OPKs. Whether I was having a hard time ovulating that month or was just extra fertile I don’t know.. but I won’t complain as it ended in my BFP (big fat positive)

You should start counting DPO (days past ovulation) on the first day after a negative OPK.

The ovulation test itself will keep the positive result indefinitely. While, it may turn discolored over the drying period the lines will not fade.

How long does LH (Luteinizing hormone) stay elevated after ovulation?

LH signals the body to release the egg in preparation for ovulation. Once the egg has been released LH is no longer needed and starts to decline immediately.

It may take a full 24 hours for it to come down, you may get an “almost positive” OPK the day after your positive test, but that almost positive should still be counted as a negative OPK and DPO 1.

How long after a Positive Ovulation Test are You Fertile

You are fertile for 2-4 days after your FIRST positive OPK.

It will take 12-36 hours for the egg to release once the LH surge begins. Once the egg is released it can survive 12-24 hours.

What Should you do Once You Get a Positive OPK?

Hopefully, you have been following some type of timed intercourse plan, like the Baby Making Blueprint and the P.R.E.G.O. Method.

If not it’s a good idea to start some kind of routine, especially if you’re trying to get pregnant fast. Sperm can live in the vagina for up to 5 days, it’s better to have an army waiting than nothing.

If you have sex on the day of ovulation only you lower your chances of getting pregnant significantly.

How to Read Ovulation Test Strips with Faint Lines

A faint test line on an OPK equals a negative result.

You will most likely ALWAYS have a faint line on an ovulation test.

Unlike pregnancy tests that detect HCG, a hormone that is ONLY produced after implantation. LH is always present in urine, in small amounts and what we are trying to catch with ovulation tests is the surge or increase in LH.

Most women get excited because they have heard that OPKs can detect pregnancy.

While this is true (I know from experience) it’s not a reliable method of detecting pregnancy and you should try and wait for a positive on an HPT (home pregnancy test).

Now, I am the POAS (pee on a stick, or cup in my case) QUEEN. So I tested with everything.

I found out I was pregnant with an OPK before an HPT at 9 DPO.

The OPK was a very, very, very strong positive though. So, if you get a CLEAR positive on your ovulation test strip then odds are pretty high that you are pregnant. But, you didn’t hear that from me!

To sum everything up – ANY test line that is not as DARK or DARKER than the control line on an ovulation test strip is a negative test.

Even if it’s just a shade lighter – it’s a negative test.

Make sure you are testing at the right time of day to get the most accurate results, you can miss your LH surge.

OPKs can detect pregnancy, should you use them for that, no? Are we all obsessed with double lines and going to use them for it anyway? 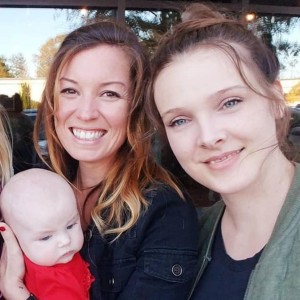 Hey there! Jackie here - Mom of 4, TTC Coach, and the creator of the Baby Making Blueprint. I always knew I wanted a large family, but what I didn't know is that I would struggle every step of the way to get pregnant. To read more about my story and why I started P is for Pregnant head on over to the Meet Jackie section.
All Posts
PrevPreviousBBT Charting Basics! Everything You Need To Know About BBT & Ovulation Tracking

This site uses Akismet to reduce spam. Learn how your comment data is processed.

What if you
NEVER had to worry about MISSING ovulation again?!
With a BMB You Won't!!

Because I want to see you get that BFP you so desperately deserve I am giving you this Special ONE TIME ONLY Offer!

Gimmie the deal
We use cookies to ensure that we give you the best experience on our website. If you continue to use this site we will assume that you are happy with it.OkPrivacy policy